The Mission School refers to a group of artists (including Barry McGee, the late Margaret Kilgallen, and Chris Johanson) who emerged from the San Francisco Bay area in the early 1990s, many of whom attended the San Francisco Art Institute. The term "Mission School" was coined by journalist Glen Helfand in a 2002 feature in the San Francisco Bay Guardian. "The Mission School, [was] known for filtering themes on urban realism through graffiti art and social commentaries on found or recycled materials, also includes internationally acclaimed artists Barry McGee (aka Twist), Alicia McCarthy and the late Margaret Kilgallen" (KQED).

Wikipedia's description of the artists' techniques and characteristics succinctly explains its creative influences and methods:

The Mission School is closely aligned with the larger lowbrow art movement, and can be considered to be a regional expression of that movement. Artists of the Mission School take their inspiration from the urban, bohemian, "street" culture of the Mission District and are strongly influenced by mural and graffiti art, comic and cartoon art, and folk art forms such as sign painting and hobo art. These artists are also noted for use of non-traditional artistic materials, such as house paint, spray paint, correction fluid, ballpoint pens, scrapboard, and found objects. Gallery work by these artists is often displayed using the "cluster method", in which a number of individual works (sometimes by different artists) are clustered closely together on a gallery wall, rather than the traditional gallery display method of widely separating individual works. 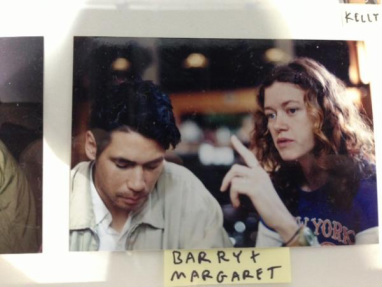 Photo from Ed Templeton's "Sheep Box of Prints"
The Mission School artists were heavily influenced by street art and so became cohorts of the artists, such as Aaron Rose, creating similar work in New York City. Mission School artists Barry McGee and Margaret Kilgallen flew out from San Francisco to take part in Aaron's Rose's show "The Independents" in 1997, connecting them with the so-called Beautiful Losers and widening their sphere of creative influence.