THE CELEBRATION OF INFLUENCE

"The first time I saw Margaret Kilgallen's art, I measured everything that I ever saw again after that against it. She had this image she was doing, and I had just walked in... I got all quiet and was like, "Wow, that's a good one." to myself. And then I was just like, "Margaret, I'm going to go back to my studio and do exactly what you just did. So, I think we influence each other like that." (Barry McGee qtd. in Rose & Leonard, 2008)

All the features of this artist subculture combine to result in what we would like to call the "celebration of influence". This celebration of influence is a stark contrast to what Harold Bloom would call the "anxiety of influence". In his book, the Anatomy of Influence, the author argues that, "Influence stalks us all as influenza and we can suffer an anguish of contamination whether we are partakers of influence or victims of influenza." (Bloom, 2011, p.23). He insists that this anxiety is a natural occurrence for artists and focuses his analysis on the role of influence within personal life and in the literary world. Bloom (2011) argues that the anxiety of influence results from the questioning of one's own originality. When one asks questions such as, "What is my creation and what is merely heard?", "What is the 'me' and the not 'me'?" and "Where do other voices end and my own begin?", one is expected to inevitably develop a love/hate relationship to his or her influences as a result of this anxiety (Bloom, p.20).

One of the most fascinating things about this subculture is its complete absence of an anxiety of influence, along with an absence of the love-hate relationships that would normally accompany it. This phenomenon could perhaps be attributed to some of the shared values of the artists:

1) The valuing of art over money. In describing Alleged, the place where members of this subculture first began to convene, Cheryl Dunn states, "There were no stakes. There was no money. It wasn't about that, you know, it was just about making stuff." (Cheryl Dunn qtd. in Rose & Leonard, 2008). Even as members of this subculture began to acquire wealth and fame, this ethos was preserved through practices such as graffiti tagging or drawing on trains before and after major art exhibits - examples of continuing to make art for art's sake. As Barry McGee says, "The best venue is still the street. My tag on the corner can communicate the same thing I just did that night." ("Twist" Barry McGee qtd. in Rose & Leonard, 2008). In a similar fashion, Deanna Templeton describes the process of creating art with her husband after achieving financial success: "In my head, when he would shoot the photos and we would get them back before they would show up on any wall, I would think, "This is going to be so much fun when we turn 70 or 80 years old to look back on the way we looked, the way we loved." That's why I like the photos in the first place; just between him and I, not what anyone else was going to see or take away from it." (Deanna Templeton qtd. in Rose & Leonard, 2008). By valuing art over money, these artists avoid the anxiety of influence that would traditionally accompany the creation of art that Bloom describes. The entire history of copyright is based on such notions of respecting and rewarding the supposed originality of authors (Bettig, 1996; Stern, 2012; Vaidhyanathan, 2001). For the artists of this subculture, however, It is more important that they make art than be original and have their originality rewarded with money. 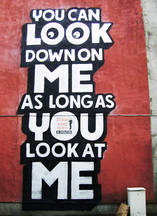 2) The valuing of independence and integrity over conformity and inauthenticity. In describing his art, Stephen Powers states, "Every time I express myself in any format, there's a bit of subversion. And really, the only subversive message I'm putting across is, "You can be you", "You have the right to be exactly who you are." I have the right to be exactly who I am, unadulterated, and bring it to you raw, uncut." (Stephen Powers qtd. in Rose & Leonard, 2008). In a similar fashion to the valuing of art over money, it was more important for these artists to be genuinely true to themselves than be original. This is perhaps due to their shared background as outcasts of mainstream society and culture - a shared background, which was inspired by other alternative, related and overlapping subcultures (such as graffiti, punk, surfing, skateboarding, etc.) with which these artists strongly identified. As Margaret Kilgallen notes, "... those are all groups of people that... were always do it yourself people. And I think that's why they're interested in each other, more than maybe, rather than anything more than that. (Margaret  qtd. in Rose & Leonard, 2008). These subcultures were similar in their valuing of integrity and independence. 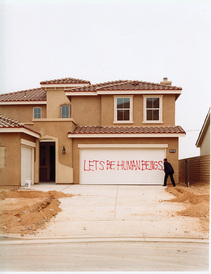 3) The valuing of community, family and friendship over success and recognition. The Barry McGee quote in the beginning of this section illustrates this point perfectly. Throughout the film it becomes clear that, not only did Barry McGee and Margaret Kilgallen inspire and influence each other, they became lovers and eventually had a child together. Other members of the subculture would regularly party, hang out, create and exhibit their artwork together, with some of the most famous shows being Minimal Trix, The Independents, and Beautiful Losers (Rose & Leonard, 2008). This artist collective has been described as a "family" (Ed Templeton qtd. in Rose & Leonard, 2008) and Aaron Rose illustrates how deeply valued these connections are: "We've been through so much together, and that's invaluable. And that's way more important than a lot of the other things in this world that are supposed to be important... That's important because, in the end, that's all you've got. When you die, all you've got are your friends. You know what I mean? You can't take your money, you can't take your fucking press, you can't take your cars, but you can take love." (Aaron Rose qtd. in Rose & Leonard, 2008). Thus, it was more important to the artists of this subculture to preserve their community, family and friendship than it was to achieve success or recognition through any form of originality.
If anything, the artists of this subculture celebrate the influences that they have on each other, just as they celebrate the value of influence, in general. If one keeps a sufficiently open perspective, then influence is not something to be anxious about. As Barry McGee describes it, "To me, if I pretend that I'm talking on the telephone, or writing on a phone booth, or three blocks later I'm in a gallery painting, it's exactly the same thing to me. I think it all references each other, influences each other." (Barry McGee qtd. in Rose & Leonard, 2008). For these artists, the very act of being inspired and creating art necessitates some degree of influence, in some way, shape, or form. Thus, the solution is to be open to various types of influence, regardless of their source or perceived status and value, and to embrace influence rather than greet it with anxiety and a love-hate attitude. For example, Mike Mills finds himself attracted to, "... those places that don't seem important, those things that seem off... off the value grid..." (Mike Mills qtd. in Rose & Leonard, 2008), and Margaret Kilgallen believes that, "... it's the part that's off that's interesting... that's where the beauty is." (Margaret Kilgallen qtd. in Rose & Leonard, 2008). The celebration of influence is an important part of this subculture. As Mike Mills states, "To anybody watching... it's good to see people, be open to different people, be influenced... I think having heroes is wildly important, to be able to say "That work is rad!", to not be like "That work sucks" all the time; which, at least, in art school, you get trained to do... "Everything's shitty", "Nothing's good enough". I think it's so much more empowering to say "That is rad! I love that! I wish I did that!". I think that's really just important to do. So, it's good to be open like that." (Mike Mills qtd. in Rose & Leonard, 2008).
Powered by