ART FOR ART'S SAKE: THE COMMERCIAL SUCCESS OF THE BEAUTIFUL LOSERS 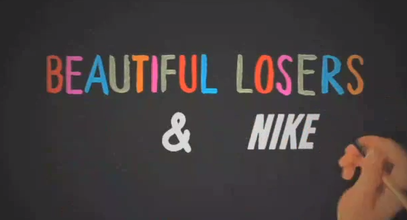 Beautiful Losers "Aaron Rose" - Make Something, Zine Workshop
Beautiful Losers features the artists often discussing the organic, free, and against the grain processes through which they created art. Some point out the “antagonistic” features of their work and creative process. This freedom to create without rules came in part out of their rejection of the canon and mainstream art. This gave their work a unique status of being anti-mainstream.

Nowadays, however, the work of these artists is often included in fine art classes. They have gained the status they sought to reject and have become part of the artistic canon. Further, they have attained a considerable amount of commercial success. From designing Nike shoes to creating an ad campaign for insurance company Liberty Mutual, many of the "Beautiful Losers" have demonstrated their talents in numerous commercial projects. The tension between being anti-mainstream, doing “art for art’s sake” on the margins, and gaining commercial and monetary success has been discussed extensively in our Remix Culture. In cases such as this, questions about making money off of one’s art work or cult artifacts arise. Jian Deleon's 2011 article for Complex Magazine on the commercial success of ten of the Beautiful Losers examines this dynamic.
While the DIY aesthetic and desire to nurture artistic creativity endures within the group, videos such as the commercially-sponsored and consumer-driven ones above, "presented by The Beautiful Losers and Nike" and a variety of ad work by Geoff McFetridge, fuel questions about the nature and goal of artistic creation.
Powered by